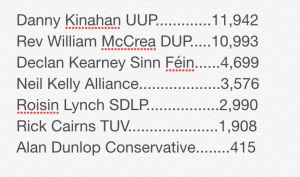 Rev William McCrea lost the seat to Danny Kinahan. McCrea comes from the nasty wing of DUP. Few outside the Party will miss him. A seat in the “House of Lords”? Or just more time for the Free Presbyterian Minister to record some more gospel songs in Nashville.

Not entirely a surprise. But still remarkable that DUP won three seats here in 2011 and UUP won just one. On these figures they would have two each. Sinn Féin are in or around a quota. Declan Kearney will be pleased.

Clearly Alliance did not field their biggest hitter, Party Leader, David Ford. But are there worrying signs for Alliance? They performed poorly in the 2014 Council Elections. Is Ford, now in his 60s and with a potential Leadership crisis going to stand in 2016.

SDLP….can they take back the seat that Tommy Burns lost in 2011. These figures say “no” but there are grounds for optimism. Roisin Lynch is highly regarded within the Party. She won a council seat in Antrim last year and this Westminster campaign will have increased her profile in the constituency.

Yet the degree of “tactical” voting to get McCrea out is the unknown factor.

Danny Kinahan is interesting. Family connexion to West Belfast and literally round the corner from me, where a family business, Lyle and Kinahan was less than two hundred metres from my front door. A family member, “Sir” Robin Kinahan was a moderate and highly regarded Mayor of Belfast in the 1960s. Another family member, Charles Kinahan was an Alliance Party MLA.

Danny himself was a British Army officer in the 1970s

There is something “Downton Abbey” about him. But ultimately decent kinda guy. He was the only UUP MLA to vote in favour of Equal Marriage.

Did this swing some Alliance and nationalist votes behind him to tip the balance against McCrea? I think it did. But it does screw up forecasts for 2016.