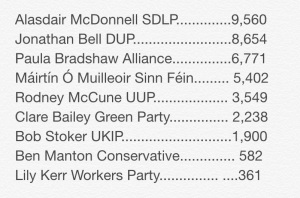 South Belfast is a strange consituency. At Assembly level, the six seats are held by five different parties. The sixth seat is held by SDLP.

Much has been made of the fact that Alasdair McDonnell has won the seat with the worst mandate of all 650 MPs. He has the lowest percentage of votes but the term “worst mandate” is a nonsense. The man holds the seat “against the head” as he puts it and doesnt seem to get the credit.

The political reality in the constituency is that it will be won narrowly…by any winner.

And certainly a seat where some people forecast he would lose. A surprise perhaps that there was no unionist pact. But unionists seemed to rally round Jonathan Bell. Realistically a unionist pact would have produced a  reaction on the nationalist-progressive side and “soft” Sinn Féin votes and “soft” Alliance votes would have gone to SDLP.

It was the last result to be declared in the Kings Hall and few folks stayed for the Declaration. The result was known relatively early. Early tally returns gave hope to SDLP and DUP but as the night progressed it was evident that Alasdair was going to win.

Jonathan Bell smirked and probably knew that within 72 hours, he would be a full member of the Executive as Minister for Trade and Enterprise.

Paula Bradshaw and Ian Parsley her husband, seemed semi-detached from other Alliance people. In fairness most Alliance members were tallying the East Belfast Count. Interesting that a senior Alliance figure agreed with me that Ms Bradshaw might well be a candidate in East Antrim next year, rather than South Belfast.

I was standing near some TV type people when the word went round that “Máirtín is here” and Mr Ó Muilleoir entered the Kings Hall bathed in TV lights, rather like a boxer entering the arena. Odd that more senior fugures did not get the same welcome.

Frankly this was not a good election for Ó Muilleoir. On three seperate occasions he has re-defined “poll topper”. He has maybe been carried away by his own re-tweets but he is basically an over-hyped beaten docket. If the strategy was “build it up, talk it up” he failed miserably.

Obviously Bell and DUP had a reasonable expectation of winning.

But Bradshaw, Ó Muilleoir and Clare Bailey (Green Party) had no real expectation of winning but all would have been happy at de-capitating the Leader of SDLP. It seemed too many people were waiting for a “Portillo Moment” that just didnt happen.

Impressed as I am with Clare Bailey…I first voted for her as a student at Queens University in 2006…I was unimpressed by the Green Party tactics. All of the people who signed Clare’s nomination papers were women. They included Dawn Purvis formerly PUP MLA and now happily re-inventing herself as a LetsGetAlongerist and feminist who like Clare, has/had connexions to the Marie Stopes Clinic…Nuala McKeever of Platform for Change (comedienne and columnist)….and Bronagh Hinds (formerly of the Womens Coalition).

Highlighting womens issues is not of course sexist but I dont like the Green Party playing the “womens card” to this extent. Insofar as none of the mainstream parties is highlighting these issues, then they are on safe ground in adopting it…expanding beyond saving whales, riding bicycles and recycling paper.

This incremental expansion by the Greens is interesting. I detect the hand of John Barry rather than Steven Agnew.

If Alasdair McDonnell is unloved by the Bloggerati, who were busy demeaning his performance before the Declaration, he did at least get a testimonial from Bob Stoker UKIP. In his speech, Bob praised Alasdair as a politician who had worked tirelessly for ALL of the people of South Belfast and indeed all the politicians on the platform, who sought to do the same….”we just have different ways of doing it”.

Odd and refreshing that on a night, we had seen DUP at its most vitriolic that a UKIP politician would remind us what it is all about.