SDLP: The Case For Opposition

Posted on January 24, 2016 by fitzjameshorse

It is certainly possible to have a very academic debate in SDLP…should the Party play a role in the Norn Iron Executive. I could present a case either way.

But really it boils down to a single photograph. Earlier this week the “new” Executive met for the first time with Arlene Foster (DUP) as First Minister and Martin McGuinness (Sinn Féin) as Deputy First Minister. And behind them the two senior civil servants and behind them their Ministers….six DUP, four Sinn Féin, two Alliance and one SDLP (Mark H Durkan…Minister ffor Environment). ….Fifteen politicians around the Cabinet table and only one SDLP voice. 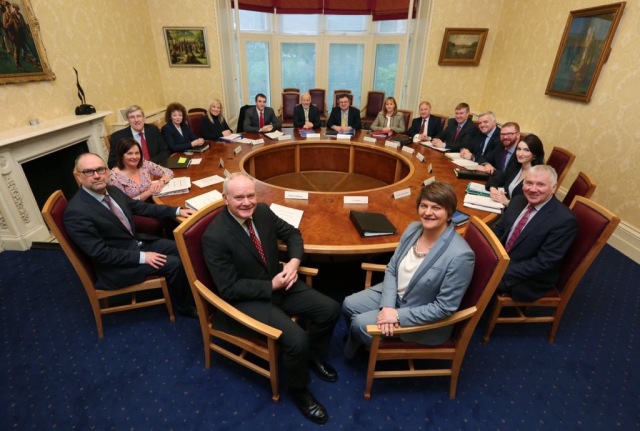 There is no real way that SDLP can influence Executive decisions. The smugness on the DUP and Sinn Féin faces show that this is a DUP-SF coalition propped up by the undemocrat Alliance Party.

There is no way that this can be claimed to be the wishes of the Electorate. SDLP voters (94,000) sent fourteen MLAs to STormont in 2011 and Alliance Party voters (52,000) sent MLAs to Stormont in 2011. The Alliance Party takes one of its two Executive seats  (Justice) as a gift from their masters in DUP and Sinn Féin.

SDLP should have walked away from this farce five years ago. There is…we are told…no place for Opposition within The power-sharing arrangements agreed on Good Friday 1998.But UUP entitled to one seat in the Cabinet Room have already walked some months ago.

SDLP will produce a manifesto before the elections in May but it is only a wish list if there is no real way of implementing policy. Of course it is the role of a political party to seek a mandate but Colum Eastwood must make it clear that the mandate SDLP gets will be for Government or Opposition….not this farce.

8 Responses to SDLP: The Case For Opposition