Posted on February 19, 2016 by fitzjameshorse

So David Cameron is jetting around Europe looking for a “new deal” for Britain in the “European Union”. The likelihood is that he will be given some concessions and he will maximise these concessions to present to the British people in a Referendum in June this year.
Essentially the big European nations…Germany and France …want him to succeed. And as always it doesnt matter a damn what Latvia, Estonia, Slovakia etc thinks.

With the increasing likelihood that Cameron will have his “triumph” and that most Conservative MPs will endorse the “triumph”….and Labour more or less committed to “Europe”….I would have expected tonights SDLP Youth “event” to have lost its sense of urgency.
SDLP are of course pro-Europe.
And this “pro-Europe” ethos is very pronounced in SDLP Youth.
There are few better examples of generational politics than “Europe”.

For myself…I actually voted in the “Wilson” Referendum. I am pretty sure that I voted “no”. The rhetoric of the early 1970s was that the “Common Market” (as it was then called)was a “rich mans club”.
In any of its subsequent incarnations, I have not warmed to “Europe”…not least because Saint Garret Fitzgerald himself acknowledged that the creeping political union was achieved in spite of the people of Europe. Basically it was achieved by stealth.I am not fond of being conned. 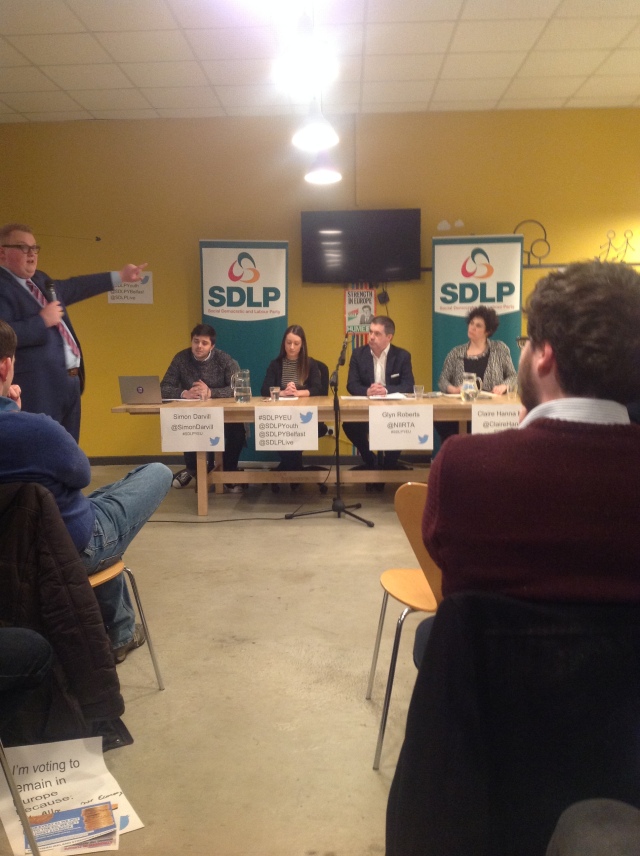 So last nights panel…Simon Darvill from the British Labour Youth Panel, Naomh Gallaghrt (SDLP International Secretary), Glyn Roberts (Norn Iron Independent Retailers Assn) and Claire Hanna MLA (SDLP, South Belfast and Spokesperson on Finance).
This was a seminar…Claire later tweeted it as a “workshop” but there was no debate. The SDLP is committed to a YES vote in any Referendum.
The format was that each person on the panel was asked by Naomh to outline their position. Simon Darvill noted the adverse effects on young people, specifically students at universities and success stories such as “Erasmus”.
Glyn Roberts who was until recently (maybe still) Chair of the Alliance Party spoke about the damage to the economy and jobs. He looked forward to Turkey joining the EU so that it is less “white Christian”…a weak point. Turkey in Europe will be a disaster. He felt we should be in campaign mode.
Claire saw things in the round.
Europe is the best conflict resolution scheme in History.A “YES” vote is important because Scotland will leave the UK (surely the break up of UK is my sole reason for living!) and while this would be good for Scottish nationalists, it would divide Ireland further. Europe is in “SDLP DNA”. DUP have a different DNA but Arlene Foster is a pragmatist…and Sinn Féin are hypocrites who voted anti Europe in nine EU Referendums in the Republic. Importantly, there is no Plan B…and no “sweetheart deals”. The consequence of leaving EU will be massive.
Simon Darvill pointed out that young people “if they vote” will more likely vote YES than NO.I am not entirely sure that this is true as people in Youth politics see things thru the prism of university politics rather than factory floors and unemployment offices. The key demographic was the skeptical “baby boomers” who may not be convinced about the joys of Europe but will be voting with our children and grandchildren in mind. Ha!
Some points made from the floor included very good points from Alaban Magennis MLA and Fearghal McKinney MLA.
The points made by other speakers included the perceived lack of transparency in Europe, the democratic deficit, the banking crisis, the bad press that Europe had and one excellent point that on a recent “Pointless” TV programme, only four of Britains 80 MEPs were not “pointless answers”.
Claire said that the bank bail out was the worst political decision made on this island and took a well deserved swipe at the tax avoiding non-residents who run the British media.
Another contributor wondered if Eastern Europewould have fallen to dictatorships without the carrot of EU membership.
And Seamus de Faoite, Chair of SDLP Youth in Belfast in the final contribution worried about xenophobia playing a part in the NO campaign.

So what do I think.
I will be 64 when I vote in this June Referendum and the argument that I am voting for my children and grandchildren is probably the most persuasive thing I heard last night. I do not know if either of my sons will vote in June. Nor will I attempt to persuade them to so do. I am inclined to think they are anti-EU.

So as I see it…I detest Europe. It is not 28 equal nations …it is an unbalanced federal state. Germany, France, Britain are “California, New York and Texas” and Latvia, Malta and Ireland are “Rhode Island, Hawaii and Delaware”. It might well be a great institution but stopping France and Germany from fighting each other is not a particuarly good reason for it to exist. After the fall of Napoleon, Belgium was created for the same reason. And that was hardly a roaring success.
Frankly “Europe” is already or soon will be a disaster.
I can certainly understand the original six…and understand the motivation for the Common Market…post 1945. And the extension to nine with patently decent nations, Denmark, Ireland and Britain.
But the first mistake was fast-tracking Greece (recovering from the Colonels Junta) into membership.
And the second mistake was fast-tracking Portugal and Spain (recovering from the fascist Salazar and Franco dictatorships).
Certainly Sweden, Finland and Austria are blameless nations and enhance the reputation of Europe.
But the 2005 expansion (Latvia, Estonia,, Lithuania, Hungary, Poland, Czech Republic, Slovakia, Slovenia, Malta and Cyprus) many recovering from Communist dictatorship and a lower standard of economy was an act of hubris.
And as for Bulgaria, Romania and Croatia…madness.
Turkey…makes no sense.
The banking crisis of 2008 emphasised the fact.
Europe is on a life support machine.

I cannot be persuaded to vote for whats good for the “United Kingdom”. Nor can I be persuaded to vote for what is good for “Europe”. Whats best for Ireland seems to be a YES vote.
But the bottom line is that I will never “love” Europe.
Insofar as I want to vote against Eurocrats, bankers, speculators and the rest….effectively they are holding a gun to the heads of my grandchildren.

So I have no real choice except to vote YES.