Most times when I visit Dublin, I find myself in Moore Street. The ILAC Shopping Mall is handy enough for a snack…McDonalds, Burger King, O’Briens, Kentucky Fried Chicken.
Coming out of the General Post Office, I tend to cross Henry Street and go down the alleyways and into Moore Street and ILAC.
It feels like a pilgrimage. In 1916, my nation was born in the GPO and less than a week later, crucified in Moore Street. The men and women from the GPO took refuge in the warren of alleys, streets and houses before the decision to surrender.
Impossible for me to make that casual 200 metre stroll without thinking about making that journey from a blazing GPO under a hail of machine-gun fire.
The most romanticised incident of the Rising is the charge led by Captain O’Rahilly (“The O’Rahilly”) and his bleeding to death in a small alleyway, now grandly named O’Rahilly Parade. His last letter to hiswife immortalised in stone. 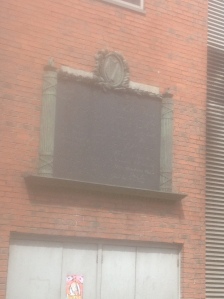 Moore Street has been allowed to decay. Grand plans for memorials seem too little too late.
Moore Street is doubly iconic. I am not a great believer in the romanticised version of Dublin in the Rare Aul Times. I am not a great believer in tales of people being the “salt of the earth”. So when I see YouTube video clips of Ronnie Drew engaging serenading and being serenaded by the street-vending women …fruit and veg, flowers etc…I am not overly impressed.
The DUBLINERS and the Dubliners…so to speak…they kinda needed each other.
I am never impressed by lovable Dubliners and “Molly Malone”…lovable Belfast people with a quick chorus of “Black Velvet Band” , lovable Scousers ferrying across the Mersey, lovable Cockneys getting their knees up for Mother Brown and lovable New Yorkers “so good they named it twice”.
Yet Moore Street has changed. Possibly the massive shopping mall dating from the 1980s is the reason. But it has changed more in the last decade as some “ethnic” businesses cater for a migrant population from West Africa and Eastern Europe.

Yet for more than two decades, going into the ILAC Centre has meant passing tenor twelve people who only say one word…”Tobacco”.
I am not a smoker. So I never stopped. And any academic interest I might have in finding out why ten or twelve people say or shout the word “Tobacco” quickly goes away. I could of course stop and try asking them to explain the connexion between them and tobacco…but casual enquiries might not be welcome.

I suspect something not quite legal is going on. But I have never seen a Garda in Moore Street…ever. Yet it is not very likely that the local Garda Station does not know that people stand outside ILAC shouting “Tobacco” at nobody in particular.
Even successive Garda Commissioners must have been off duty and shopping at ILAC . I daresay successive senior officials at the Revenue Commissioners have shopped at ILAC. Do Dublin journalists not shop at the ILAC? Maybe even Cabinet Ministers. Maybe even Ministers of Finance. Is Moore Street in the constituency of Mary Lou McDonald, the Deputy Leader of Sinn Féin? Maybe she has canvassed outside ILAC. I know that she is very keen on the historical importance of Moore Street.
I know Mary Lou is very pissed off at the problem of Tax Evasion. Although she did describe a big supporter of Sinn Féin (Mr Slab Murphy) the convicted tax evader and smuggler as “typical country man”.
Maybe Mary Lou is confused.

I KNOW that I am confused.
I dont exactly know whats going on. It doesnt appear legit.
As these enterprising folks have been doing this for twenty years, it eems unlikely that successive shipments of cigarettes have fallen off trucks at Dublin Docks. Nor does it seem likely that occasional tourists to and from Europe have made a small profit on the personal allowance on cigarettes bought in France and Spain. Maybe these are counterfeit cigarettes made in such places as China and Vietnam and not subject to the same Health and Safety concerns of western European governments.
It may or may not be organised by criminals like the Kinahans and the Hutches.

I dont really understand the choreography of it all. The salt-of-the-earth Dubliner shouting “Tobacco” doesnt actually seem to have any in his/her possession. I dont know what happens when a passer-by says “yes Id like 100 Embassy Regal but I am not aware of cigarettes being legitimately sold in Tesco, Super Valu, Centra or thousands of other outlets in the Dublin Metropolitan area”.
So where is the Tobacco?
Well I have eyes. It doesnt take long to work it out.
But why isnt something done?
If the Revenue Commissioners…ie the Irish Citizen…ie the Republic of Ireland ….is being short-changed (on Moore Street for GODS sake!!!) then it is a slap in the face to the men and women who were under machine-gun fire a century ago.
The decayed buildings is not the biggest scandal in Moore Street in 2016.

Yet there is a curious connexion between Tax Evasion and the establishment of Republics. Look at Boston pre-1776…a Republic was founded with Tax EVasion as its core value. Arguably in a wing of American Republican Party, Libertarianism and militia men in Montana, that is still a big thing.
Arguably the Republic of Ireland was post-Enlightenment but there is certainly a (smaller) anti-government feeling in Ireland….so that Fianna Fáilers and Fine Gaelers might be occasionally “cute hoors” and Sinn Féiners can be “typical country men”.